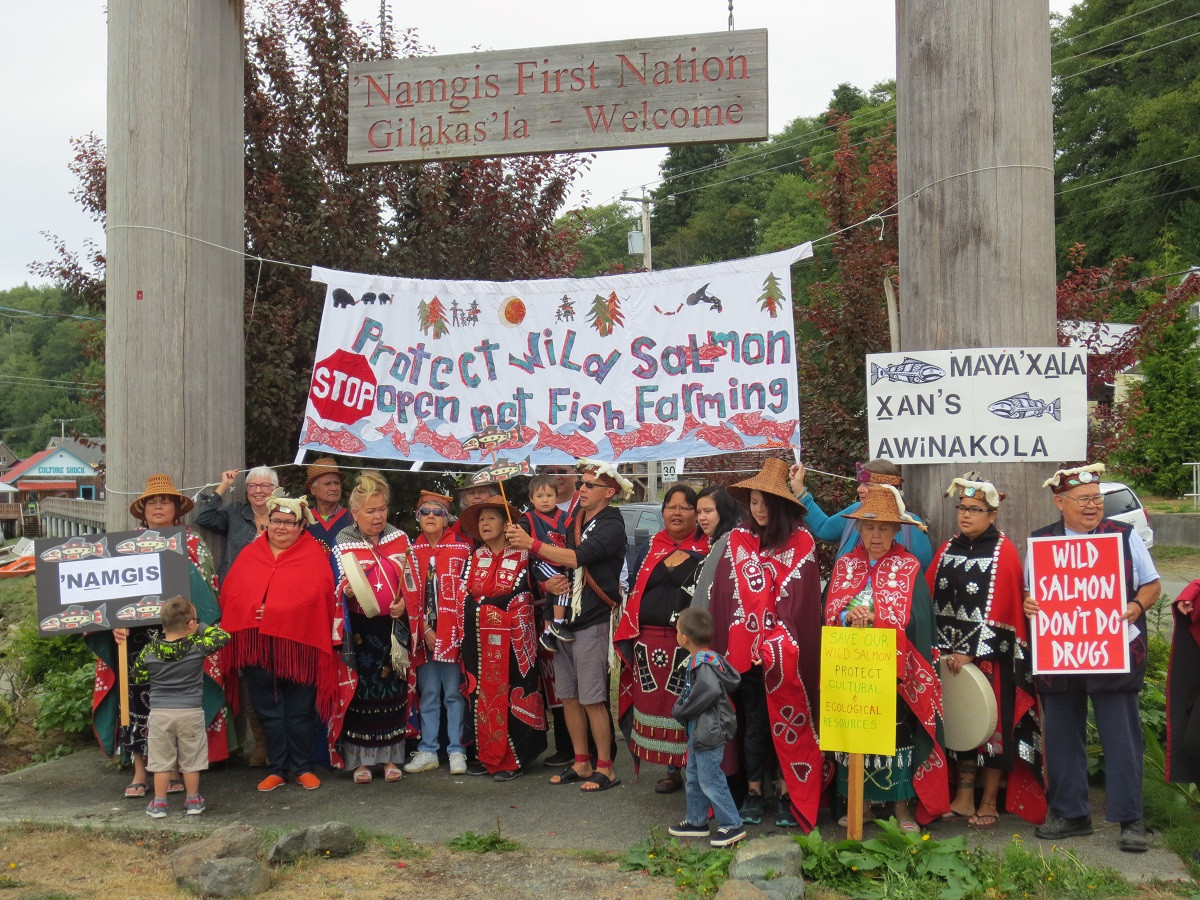 In December 2018 a ground-breaking agreement was reached between British Columbia and First Nations to phase out fish farming in the Broughton Archipelago.  Consistent with the UN Declaration on the Rights of Indigenous Peoples, the agreement was made through a consent-based process and recognizes the jurisdiction of the Mamalilikala, Namgis and Kwikwasut'inuxw Haxwa'mis First Nations over their marine territories.

For nearly 30 years, the Mamalilikala, Namgis and Kwikwasut'inuxw Haxwa'mis First Nations worked to remove fish farms from the wild salmon migration routes in their homelands.  As I described in an earlier blog post, these First Nations are concerned about the impacts of parasites and diseases emanating from fish farms, and the danger to wild salmon.  In the summer and fall of 2017, hereditary chiefs, elders, and youth, with widespread support from their communities, occupied two Marine Harvest fish farms.

Luckily for the First Nations of the Broughton Archipelago, a red-green coalition had recently taken power in British Columbia.  The new provincial government was concerned about the impacts of fish farming on wild salmon, and had pledged in their electoral campaign to do something about it.

In October 2017, just as tensions over the fish farm occupations were reaching new heights, the premier of British Columbia, John Horgan, accompanied by three of his ministers, met with 40 First Nations hereditary leaders in the Big House on the reserve of the Namgis First Nation in Alert Bay.  The setting of the Big House is significant.  It is the ceremonial space of the potlatch, where Indigenous governance is still practiced, and where rights to territory are publicly displayed and acknowledged.  At that meeting the First Nations delivered a united message of opposition to open-net fish farms, and reiterated that the fish farms continue to operate without the First Nations’ free, prior and informed consent.

The provincial government’s presence in the Big House, and its openness to Indigenous protocols, set the stage for a government-to-government process, though it took months of negotiations between the parties to establish the principles of collaboration.

In June of 2018, BC’s Agriculture Minister, Lana Popham, announced that three of the Broughton Archipelago’s First Nations – ’Namgis, Kwikwasut’inuxw Haxwa’mis and Mamalilikulla First Nations – had signed a Letter of Understanding with the province, pledging to reach consensus with British Columbia on renewal of the existing fish farm licences.  A committee composed of equal numbers of First Nations and provincial representatives was tasked with making recommendations on the future of fish farms in the Broughton Archipelago.  One of the most interesting terms of the collaboration was the following:

“There is a strong potential for ongoing and significant adverse effects and impacts of the Fish Farms, and different perspectives of risk, therefore the scientific weight of evidence regarding the impacts of open-net pen Atlantic salmon aquaculture on wild salmon populations will not be debated unless specifically required to reach consensus recommendations.”

In December 2018, the outcome of the negotiations was announced to the public.  By the end of 2022, ten fish farms in the Broughton Archipelago will be removed.  Another seven farms will continue operating beyond that date only if the companies involved – Cermaq and Marine Harvest – manage to secure the free, prior, and informed consent of the three First Nations.  An Indigenous Monitoring and Inspection Plan was put in place for the interim.  It will provide First Nations with greater access to information and the authority to independently test and monitor fish farms for pathogens, including the right to test hatchery salmon for viruses before the smolts are placed in ocean net cages. The fish farm removals will create a northern, farm-free migration corridor for wild salmon, potentially protecting three key salmon rivers in the area.

Critics of the agreement say that while it is a step forward, particularly with regard to relations between BC and Indigenous peoples, the agreement merely shifts problems with fish farming to other parts of the coast.  Marine Harvest does not plan to reduce its production levels.  British Columbia has indicated, however, that even in other parts of the province, it will no longer renew the licences of fish farming companies after the year 2022, unless companies have agreements in place with the First Nation in whose territory they propose to operate. First Nations’ approval will therefore be a requirement for provincial approval of the site licence. Importantly, there are no fish farming operations in waters that are not part of First Nations territories in British Columbia, among other things due to the industry’s need for infrastructure and work force close to their operations.

It remains to be seen how the aspirations of industry will be reconciled with the need for agreements with First Nations.  One First Nation in the Broughton Archipelago – a neighbor to the three First Nations involved in the December 2018 agreement -- is not banking on the political good will of the province, and is seeking a solution that is based on its own jurisdiction. In May 2018, the Dzawada’enuxw First Nation launched an aboriginal title claim to its traditional territories, including marine territories in the Kingcome Inlet and Broughton Archipelago region that are presently occupied by Marine Harvest and Cermaq.

Whatever the stance one has on the agreement, it is clear that it comes at a critical time, when the extinction of wild salmon is underway but might still be reversed.

No comments made yet. Be the first to submit a comment

By accepting you will be accessing a service provided by a third-party external to https://meron.no/